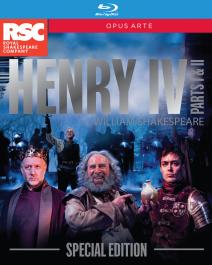 Henry IV Part I: With his crown under threat from enemies both foreign and domestic, Henry IV prepares for war. Having deposed the previous king, he is only too aware how tenuous his position is, and the price to be paid if he falters. As his father prepares to defend his crown, Prince Hal is languishing in the taverns and brothels of London, revelling in the company of his friend, the notorious Sir John Falstaff. With the onset of war, Hal and Falstaff are thrust into the brutal reality of the battlefield, where Hal must confront his responsibilities to family and throne.

Henry IV Part II: King Henry's health is failing as a second rebellion against his reign threatens to surface. Intent on securing his legacy, he is uncertain that his son Hal is a worthy heir, believing him more concerned with earthly pleasures than the responsibility of rule. Sir John Falstaff is sent to the countryside to recruit fresh troops. Amongst the unwitting locals, opportunities for embezzlement and profiteering prove impossible to resist as Falstaff gleefully indulges in the business of lining his own pockets. As the King's health continues to worsen, Hal must choose between duty and loyalty to an old friend.

"Shakespeare's two greatest plays have always been a defining experience for RSC directors. Gregory Doran now puts his decisive seal on the company by offering a production that, like last year's Richard II, combines richness of texture with psychological insight. It also contains a major performance from Antony Sher as Falstaff." (The Guardian ★★★★)

"Performed on the mighty thrust stage of the RSC's main house in Stratford, the productions have an admirably assured grasp of the plays' panoramic sweep, moving with fluency and a fine feel for thematic counterpoint between care-racked court and lax, frowsty Eastcheap, boozer and battlefield, urban and pastoral." (The Independent ★★★★)

"What a walloping spectacle the Royal Shakespeare Company gives us with its two Henry IV plays. They are staged in the expansive manner, the acting fruity, the lighting full of oranges and blues. Director Gregory Doran presents the panorama of Harry Bolingbroke’s England and the maturing of his heir Hal from wastrel to monarch. Here is Shakespeare perfect for both teenagers and old romantics. We have a pulsatingly deranged Hotspur, Sir Antony Sher’s typically mannered Falstaff, some memorable cameos — and hairdos worthy of a bonkers Hollywood B film." (The Daily Mail ★★★★)