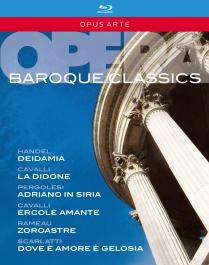 ​La Didone is one of the earliest operas in existence, and Ercole Amante, at the time of its premiere, was the grandest show ever performed in Europe. By contrast, prior to its revival in the very Baroque gem of a theatre that hosted its premiere, the courtly farce Dove È Amore È Gelosia was virtually unknown, as was the hitherto neglected Deidamia, Handel’s final Italian opera. The 18th-century Baroque theatre machinery at Drottningholm lends authenticity to Rameau’s Zoroastre, as does the period Pergolesi Theatre at Jesi to the performance of Adriano in Siria. Sally Matthews is ‘captivating’ as Deidamia (New York Times), Anna Bonitatibus is an uncompromisingly intense Didone, and Luca Pisaroni’s Hercules is by turns heroic and melodious. Specialist ensembles, including Concerto Köln, Les Arts Florissants and Les Talens Lyriques,bring apt nuance and colour to these sumptuous productions showcasing worthy masterworks of the Baroque.

The Drottningholm Theatre Orchestra and Chorus

"With a small orchestra of solo strings, continuo and a couple of woodwind, the focus is very much on the declamatory skills of the singers. Anna Bonitatibus is outstanding, especially in her confrontation, impassioned but dignified, with Aeneas ..." (Gramophone - La Didone)

"This is the most impressive and engaging product of Pergolesi's anniversary year I've heard so far." (International Record Review - Adriano in Siria)

"This is a ravishing production in every department - scenery, stage effects, costumes, dancing, acting and music. Luca Pisaroni is an assured and vigorous Hercules - aided by action-man plastic muscles - but it is Cavalli’s women who steal the show" (BBC Music Magazine - Ercole Amante)

"After so many opera productions updated to modern dress, it is refreshing to have a thoroughly traditional production, set in the beautifully restored Drottingholm Court Theatre ... Casting in this production is first rate, with clean, firm voices the rule and with the dances, so important in Rameau operas, perfectly integrated. Christophe Rousset is the stylish conductor. A first-class set in every way." (The Penguin Guide - Zoroastre)

"... the theatre is the real star of the production...in truth nothing more seems necessary here than to sing and act with skill and wit, which the four Czech singers all manage very well ... The orchestral playing and conducting are neat and tidy ..." (Gramophone - Dove e Amore e Gelosia)