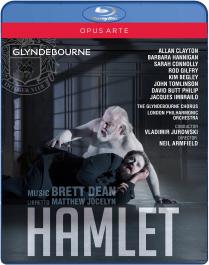 ​The world premiere recording of Brett Dean’s new opera based onShakespeare’s best-known tragedy: To be, or not to be. This is Hamlet’sdilemma, and the essence of Shakespeare’s most famous and arguablygreatest work, given new life in operatic form in this originalGlyndebourne commission. Thoughts of murder and revenge driveHamlet when he learns that it was his uncle Claudius who killed hisfather, the King of Denmark, then seized his father’s crown and wife.But Hamlet’s vengeance vies with the question: is suicide a morally validdeed in an unbearably painful world?

Dean’s colourful, energetic, witty and richly lyrical music expertly captures the modernity of Shakespeare’s timeless tale, while also exploiting the traditional operatic elements of arias, ensembles and choruses. Matthew Jocelyn’s inspired libretto is pure Shakespeare, adhering to the Bard’s narrative thread but abridging, reconfiguring and interweaving it into motifs that highlight the main dramatic themes: death, madness, the impossibility of certainty and the complexities of action.

"With a reverent but mischievous take on the text and a superb cast led by tenor Allan Clayton, this world premiere production rises to the challenge set by Shakespeare’s great play " (The Guardian ★★★★)

"Superbly sung and played, the opera forms the high point of the festival’s 2017 season and will give the audience plenty to chew on long after their picnic has been digested. " (The Financial Times ★★★★)

"The total work of art cries out to be seen and heard. That’s especially due to the return of Jurowski, the house’s inspirational music director from 2001 to 2013, whose typically meticulous work not just with his magnificent London Philharmonic but also with the singers – he spent a whole day before the premiere making sure the covers were in a state of readiness to go on if necessary – and whose presence at every stage of the production can’t be praised too highly. Every composer needs a conductor like this to realise the ideal." (The Arts Desk ★★★★)