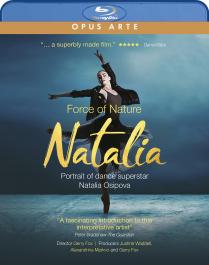 Force of Nature Natalia follows a season in the life dance superstar Natalia Osipova. With unique access to Natalia's personal archive, we follow her preparations for a fifth season as a principal of the Royal Ballet as she continues to champion contemporary dance with some of the world’s greatest choreographers.  We watch the rehearsal process of new ballet Mother by Arthur Pita, a new commission with Sidi Larbi Cherkaoui, and the Royal Ballet's legendary production of La Bayadere directed by Natalia Makarova.

Natalia opens up about her life and history, her childhood in Russia, her time with American Ballet Theatre and her journey to the Opera House. It is an unparalleled opportunity to get up close and personal with the leading ballerina of our generation and understand why critics and audiences all over the world call her a force of nature of the dance world.

"A fascinating introduction to this interpretative artist." (The Guardian ★★★★)

"Considered one of the world's greatest ballet dancers, Natalia Osipova is much in demand by audiences, ballet companies, choreographers, photographers and collaborators across the globe." (Dancing Times)

"Natalia Osipova is one of the worlds greatest ballerinas... Force of Nature Natalia gives a tantalising behind-the-scenes glimpse into her life and career." (Evening Standard)

"A thrilling new film documentary... Director Gerald Fox has delivered the perfect treat for ballet fans, arts lovers and contemporary dance audiences with his superb film documentary... Force of Nature Natalia follows a year in the life of this fabulous dancer... Fox takes the audience on a fascinating journey to the heart of the Royal Opera House, home of the Royal Ballet to watch Osipova in the creation and rehearsal of some thrilling works." (Broadway World)

"This is a superbly made film, its intimacy is revelatory – for those who are and aren’t directly involved with the dance world. It draws a portrait of a supreme artist, a woman with exceptional humility, all sensitively handled with warmth and humour. As was stated in the film – it’s impossible to be indifferent to her, and it seems, most of us cannot get enough of her. Compelling viewing." (Dance Tabs)

"Natalia Osipova is one of the worlds greatest ballerinas" (Evening Standard)