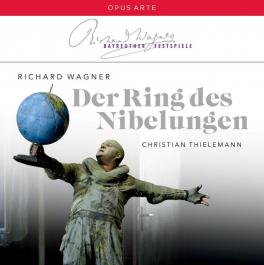 Wagner's epic four-opera cycle is a work of extraordinary scale - a full performance takes place over four nights with a total playing time of approximately 15 hours. Based loosely on characters from the Norse sagas, it is a work that follows the struggles of gods, heroes, mythical creatures, and the eponymous magical Ring that grants dominion over the entire world. The music is richly textured, and grows in complexity as the cycle proceeds - Wagner wrote for an orchestra of gargantuan proportions, including a greatly enlarged brass section with new instruments invented especially for the work. The Bayreuth Festspielhaus was constructed for this work to be performed in, with a specially designed stage that allows singers voices to blend with the huge orchestra without straining - essential for such long performances.

"Whatever one's take on the production, Mr. Thielemann drew a probing, radiant and exhilarating musical performance from this orchestra of dedicated instrumentalists." (The New York Times)

"...there is no doubt that this year's Ring at Bayreuth belongs to...Thielemann...[who] creates a musical experience epic in its scale and inexorable in its apocalyptic, shattering power." (The Guardian)

"Over the years Thielemann's Ring, like all his Wagner, has been a continuous work in progress. Throughout he now revels in the lightness and impressionism of, say, Karajan or even Clemens Krauss, mixed with a rather infectious sense of humour that, as in the score, is present even in the supposed heroics of the Valkyries' gathering or the forging of Nothung." (Gramophone)

"In the (literally) thunderous atmosphere of Bayreuth every new Ring staging courts controversy. This latest, by playwright Tankred Dorst attracted limited enthusiasm for its hodgepodge modernism. The musical side, however, was another matter  one reason this reaches us on CD. For many, Christian Thielemann is the heir to the grandiloquent old German tradition exemplified by Knappertsbuch and Klemperer, and he goes some way to justifying that here." (BBC Music Magazine)