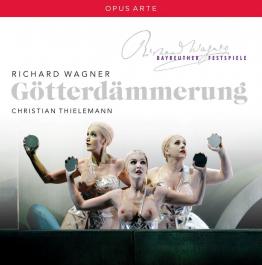 Recorded live at the Bayreuth Festival in 2008, thisproduction is the fourth part of Wagners epic Ring Cycle.Christian Thielemann, one of the most sought-afterconductors in the world, takes the baton with the BayreuthFestival Chorus and Orchestra.

"...there is no doubt that this year's Ring at Bayreuth belongs to...Thielemann....[who] creates a musical experience epic in its scale and inexorable in its apocalyptic, shattering power." (The Guardian)

"At the end of a Ring cycle at Bayreuth, it is traditional that first the chorus and then the orchestra fill the stage and are greeted with round after round of applause. Rightly, for they and the marvellous acoustics form Wagners greatest treasure here...With Christian Thielemann conducting this is indeed a triumph." (The Stage)