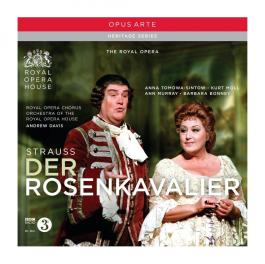 Richard Strauss's most popular opera mixes comedy and philosophy with farce and romance. Exceptional singing from Anna Tomowa-Sintow (The Marschallin) is perfectly complemented by Kurt Moll's Baron Ochs, Ann Murray's Octavian and Barbara Bonney's Sophie, with the Chorus and Orchestra of the Royal Opera House conducted by Andrew Davis.

"Andrew Davis has firm control of the score, its textures iridescent, the momentum sustained with a grace and urgency exactly suited to the psychological turmoil afflicting the protagonists. Dont miss the new cast at any cost." (Opera)

"The John Schlesinger production of Der Rosenkavalier may have been around for more than a decade, but it continues to ravish the eye." (The Times)