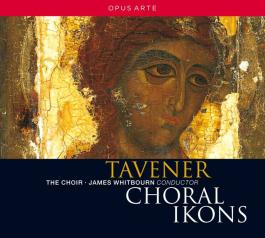 John Tavener describes his music as resembling 'ikons in sound - a window on to the Divine world. The British conductor and composer James Whitbourn conducts the London-based ensemble The Choir in a programme of Tavener's hauntingly beautiful unaccompanied choral music in performances described as 'impressive and spiritual'.

"The power of the performances is overwhelming and the credit goes to James Whitbourn and his vocal ensemble The Choir." (The Organ)

"The clue is not to over-dramatise the musical content - after all, Tavener is projecting a musical image, not telling a story - and The Choir thrive on the more expansive and extended images, such as Song for Athene and The Hymn of the Unwaning Light." (Gramophone)