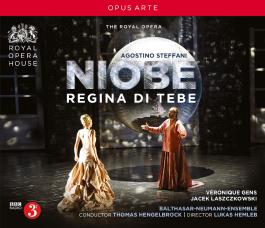 A world-famous court composer during his lifetime, Agostino Steffani was also a significant influence on the likes of Handel, J.S. Bach and Telemann, but his music fell into neglect after his death. Thanks to conductor and Baroque specialist Thomas Hengelbrock, Steffani’s musically rich and emotionally intense fifth opera Niobe, regina di Tebe was revived in  2008, and is heard here in The Royal Opera’s acclaimed 2010 production. With a ‘delectable’ and ‘seductive’ performance from Véronique Gens as the proud queen who is punished for defying the gods, supported by male soprano Jacek  Laszczkowski, who ‘thrills with his astonishing power at the top of the voice … [giving] an exciting approximation of what  the castrato could do’ (Independent), this recording does full justice to Steffani’s forgotten masterpiece.

"It's sung with terrific verve by a top cast - French soprano Veronique Gens as Niobe and Polish male soprano Jacek Laszczkowski as her husband, Anfione, are outstanding. And the production is opulently costumed, full of flashes of humour and one unforgettable scene in which giant black balloons float around like ominous planets as we are transported to the heavens. But the gods are wayward and the bubble will soon burst." (The Daily Mail)

"Lukas Hemleb's production is tasteful and elegant, and graced with some imaginative coups de théâtre. Thomas Henegelbrock conducts the expert Balthasar Neumann Ensemble, and there is first-class singing from a cast of period stylists led by Véronique Gens (in the title role), Iestyn Davies, and a bizarre-sounding but undoubtedly accomplished 'male soprano' Jacek Laszczkowski." (The Daily Telegraph ★★★★)

"The Balthasar Neumann Ensemble under Thomas Hengelbrock really rock – and I mean that almost literally. ... male soprano Jacek Laszczkowski (Anfione) thrills with his astonishing power at the top of the voice (the middle comes and goes a little but this is an exciting approximation of what the castrato could do); and the delectable Veronique Gens (Niobe) is seductive even when turning to stone. One of the score’s highlights is her beautiful aria in duetto with the elegant Iestyn Davies not so discreetly disguised as Mars." (The Independent ★★★★)

"Véronique Gens embodies the title role almost ideally. She is able to display expressively the noble timbre of her voice in one tessitura without reaching her limits. The Balthasar-Neumann-Ensemble conducted by Thomas Hengelbrock unlocks most beautifully the richness of tone of this extraordinary score and is the musical power centre of the performance. This live-recording conveys the magnificent theatricality of 'Niobe' which is of course also communicated through the ears." (Opernwelt)