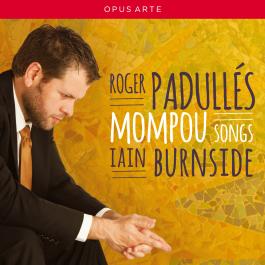 The Catalan tenor presents a studio recording entirely devoted to the beautiful songs of his great Catalan-Spanish compatriot, Federico Mompou (1893-1987). Though Mompou’s fame rests largely on his solo piano works, his many songs comprise the other genre for which he is recognised as a twentieth-century master. Roger Padullés is accompanied by the noted accompanist Iain Burnside.

Presenting the major singers of today and the stars of tomorrow, the Rosenblatt Recitals are London's only world-class season of opera recitals. This new partnership with Opus Arte will see 5-6 CDs released per year, based predominantly on studio recordings with occasional bonus live tracks.

"Burnside brings out all the colours of Mompou's chromatic ornamentation, overlaying a firmly tonal or modal base, and is particularly adept, as in the Canço de la fira, at elucidating Mompou's intricate part-writing." (BBC Music Magazine ★★★★)

"This is a delightful disc that should be heard by everyone with an interest in art-songs." (Musicweb International)