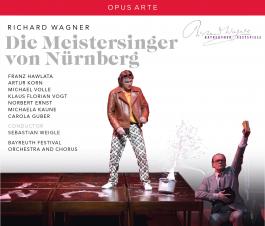 Ostensibly Richard Wagner's opera Die Meistersinger von Nürnberg tells a humorous tale about artistically inclined craftsmen. Goldsmith Veit Pogner promises his daughter Eva'shand in marriage to the winner of a song contest, to which threemen are potentially eligible. But upon closer inspection, what is atfirst glance a harmless farce in a middle-class setting emerges as aprofound social analysis. Wagner uses his protagonists to showhow a community deals with tradition and those who break with itand just how much innovation and deviation from the norm it cantolerate - as well as to examine what value society places, andshould place, on art.

"Meistersinger' that's on an entirely new Wagnerian scale...it is full of smart ideas and moments of effective theater." (The Washington Post)

"... as all stage productions should be, this is 200 per cent a Meistersinger to see." (Gramophone)

"[Volle's Beckmesser] is so consistently alert, so wary of traditional caricature, so mellifluous in sound, and so well acted that it is, in fact, almost plausible to see him as the opera's hero...Franz Hawlata is a refreshingly youthful Sachs (which makes the Sachs-Eva-Walther triangle more affecting" (International Record Review)

"This production revolves around Beckmesser, and Michael Volle puts in an exceptional performance...I would urge even the sceptics to take this production seriously...A complex and troubling but also consummate and satisfying experience: even on DVD it leaves a lasting impression." (Classical Review)