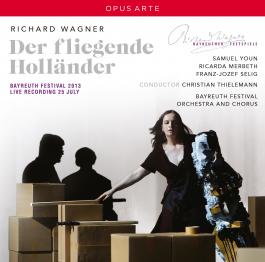 ​‘The excellent Mr Youn...sings with dignity touched with anguish…Merbeth...brings a big, penetrating voice to the role... Selig is apowerhouse Daland… Bruns brings an ardent voice and impetuosityto the Steersman… Thielemann...drew pulsing, dynamic andtransparent playing from the...Orchestra… the result was musicmaking of overwhelming naturalness.’ New York Times

"... one revels in Christian Thielemann's masterly handling of the Overture's tempo modifications and, thereafter, the lustrous sonorities that support the singers in this single-act version of the opera... Youn is a particular revelation, with bass qualities to establish the character's emotional weight but also effective baritonal colours that convey anguish with great specificity." (Gramophone)

"Christian Thielemann, the festival’s de facto music director, drew pulsing, dynamic and transparent playing from the Bayreuth Festival Orchestra. He clearly made careful decisions about when a burst of fleet notes in the strings should be executed with maximum clarity and when a surging passage should be milked for drama. Yet the result was music-making of overwhelming naturalness." (The New York Times)

"Christian Thielemann and das Festspielorchester received the biggest cheers, and rightly so: their account – thrillingly intense and demonic, while respecting of the sweeter passages – was superlative." (The Financial Times)