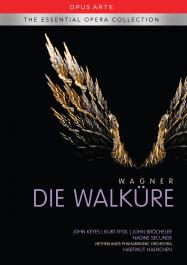 Die Walküre is the second part of Richard Wagner's gargantuan tetralogy, Der Ring des Nibelungen, concerning the irreconcilable struggle between Power and Love. The originality of this production from Het Muziektheater Amsterdam more than meets the perennial challenge of staging The Ring. Pierre Audi's stage direction, in which the orchestra is placed on the ring-shaped stage, succeeds in forging a profound unity between the lyrical, mythical and philosophical qualities of Wagner's work, complemented by George Tsypin's astonishing sets and wonderful costumes by Oscar-winning Eiko Ishioka. Impassioned singing, and intensely dramatic playing by the Netherlands Philharmonic Orchestra under the energetic baton of Hartmut Haenchen create a vigorous, almost intimate performance that will leave an indelible impression. This production of The Ring is based on the new collected works of Richard Wagner.

The Essential Opera Collection is an exciting new mid-price series that brings together popular operas and classic productions in simple stylish packaging. The ten launch titles represent the leading opera houses of the world, including The Royal Opera House, Teatro Real, Paris Opera, Glyndebourne and The Netherlands Opera. This 19 DVD box set contains the first batch of ten titles at an extremely attractive price. Each title also available separately.

"It is breathtaking to experience how well the technical and spatial possibilities of Het Muziektheater are being used; and even more overwhelming to see the focus on the individual in all this excitement. Het Muziektheater had a premiere without any equal..." (Het Financieële Dagblad)