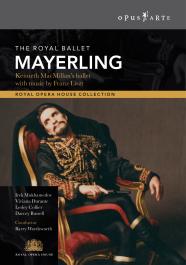 The Royal Ballet presents a stellar cast in Kenneth MacMillan's daring and powerful ballet, filmed in 1994, with John Lanchbery's sumptuous scoring of music by Franz Liszt. The dramatic soundscape is matched by MacMillans penetrating interpretation of the events surrounding the double suicide of Crown Prince Rudolf of Austria-Hungary and his young mistress, Mary Vetsera, at Mayerling in January 1889.

"while Mara Galeazzi as Mary Vetsera nearly stole the show with her natural conviction, exuberance and authoritative technique, the evening belonged to Watson as Rudolf, one of the most challenging male roles ever created." (The Sunday Express )