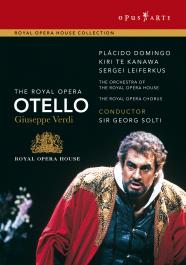 The Orchestra of the Royal Opera House; Sir Georg Solti

In what many believe to be the finest production of Otello in modern times, Plácido Domingo and Kiri Te Kanawa lead a world-class cast under the exquisite musical direction of Sir Georg Solti. An outstanding performance of the first of Verdi's two late Shakespearian operas, universally regarded as sublime masterpieces of grand opera.

"Filmed in 1992, Moshinsky's traditional Covent Garden production with lavish costumes and sets makes an ideal DVD with an almost unmatchable cast of principals. Plácido Domingo was at his peak as Otello, powerful and heroic, while Dame Kiri Te Kanawa as Desdemona sings ravishingly, fining her tone down to a mere whisper at times. Sergei Leiferkus too was at his finest as Iago, and Sir Georg Solti conducts his Covent Garden forces with characteristic high drama. Well recorded, it is an outstanding DVD." (The Penguin Guide)

"Pure gold from the top team...Here was an evening to cherish, one to go straight into the memory in firmest indelible ink...The combination of Domingo and Solti promised gold and delivered every ounce expected." (The Times)

"This was...probably the best cast available for the opera at that time...The chorus produces empowered tone and the orchestra is on keen form under Solti, who clearly admires every bar of Verdis masterpiece and brings to it a blend of theatrical dynamism and musical detail." (BBC Music Magazine)